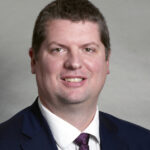 Since joining MAC in 2011, Ben has been responsible for the Towards Sustainable Mining (TSM) initiative, MAC’s award-winning program focused on enabling mining companies to meet society’s needs for minerals, metals and energy products in the most socially, economically and environmentally responsible way. Over the last few years, Ben has played an important role in the international growth of TSM as it becomes a sought-after responsible mining standard.  During his time working with TSM, it spread beyond Canada to be adopted by national mining associations around the world.

In 2018, Ben took on the role of Senior Vice President and is responsible for overseeing MAC’s work related to Public Affairs & Communications and Government Relations.  Ben has extensive experience in the mining sector and began working in the industry in 2004 at the Myra Falls Operations in British Columbia where he worked as an Environmental Supervisor for the mine. Prior to joining MAC, Ben served as Vice President of Environment and Technical Affairs for the Mining Association of British Columbia and was also a Senior Policy Analyst with Natural Resources Canada. Ben is a member of both the Minister of International Trade’s Multi-Stakeholder Advisory Body on Responsible Business Conduct and the Responsible Business Alliance’s Responsible Mining Initiative Engagement Team.

Delving into TSM and climate change standards 9:10 am

Explaining how the climate change standard and TSM standard work together to help future-proof and shape a more sustainable industry.Read more